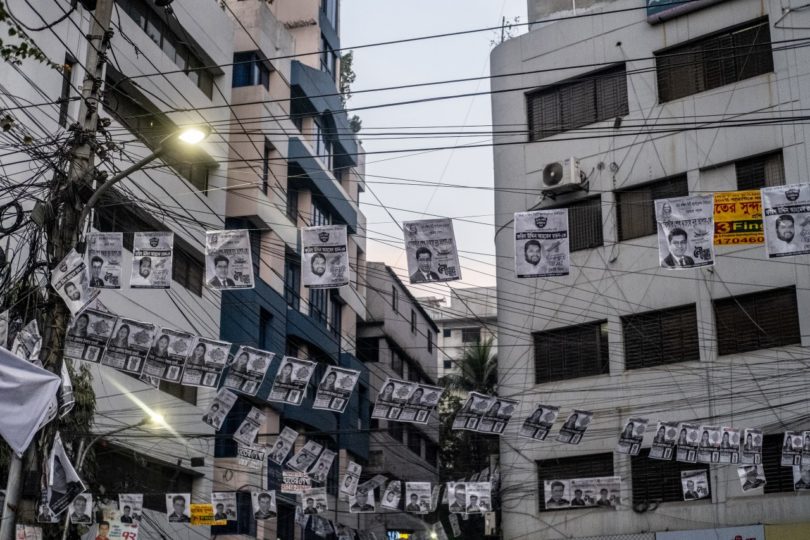 We are almost at the desk when an immigration police officer ushers us out of the queue towards another desk behind the arrivals hall; a Ugandan man, his wife, two sons, myself and my travel companion, Innocent. We had been standing for nearly an hour waiting to be stamped into Bangladesh. Innocent is famished. I am icky and eager for sleep. For another thirty minutes, we stand at the desk as they toggle our passports, dark green and sky blue booklets, which together with our out-of-placeness here, they question and scrutinise painstakingly. I am amused by the antics. The officer who briefly leaves his desk at the queue hands us off to another who gathers our passports and places it in front of him before getting on the phone. Another, with the air of a superior, comes to our new spot behind the large arrivals hall with people teeming in all directions and looks over our visas again and again and again. Briefly, in response to a radio message, the officers dispatch then return to us and our passports. We strike up a conversation with the Ugandan. His wife and sons have gone into a café nearby. He is in the process of relocating. His office has sent him here. From Egypt. We are being profiled, he says. Of course, we affirm. The curse of our green passports ventures even to Southeast Asia, to Dhaka, where not a lot of Africans come. While on the flight from Doha, a four-hour layover from Lagos, a wide-eyed air hostess with rosy cheeks asks repeatedly why we are headed to Dhaka. We are out of place in the aircraft.

Dhaka does not feel out of place. If you exclude the intense stares as we drive out of the Hazrat Shahjalal International Airport. Even though drivers are seated on the right hand side of their vehicles, the spirit is very much Lagos—incessant honking, a methodical recklessness with the driving, we even sit in traffic as we head to the hotel, moving and halting like a jerky toy train. Half-finished ambitious construction projects, rickshaws—bicycle chariots as I describe it to my sister—tricycles with doors, shiny-wheeled cars meld onto the streets which are oddly narrow and familiar. Power cables tousled like a toddler’s first classwork on lettering come to life in the air, hang from poles designated and constructed. Monochrome mayoral campaign posters line these cables like hanging party banners. People occupy every possible space, men in lungis shining shoes, selling tea in small glass tumblers and a variety of flat breads, men having breakfast or lunch, smoking; school girls with their white hijabis and dainty school bags; suited men on rickshaws heading to work; women in loose pants, salwar and colourful tunics, kameez talking animatedly, moving. Lagos.

Newton’s first law of motion. An object remains in a complete state of rest or in uniform motion along a straight line unless compelled to change its state by the action of an external force. Conflict. The search for a better life. Love. Family. New experiences. A summation of two or more of these, forces compelling enough to stir or force movement.

Bangladesh’s borders were and continue to be an intensely contested thing contorting and shifting over the centuries into what we hope to encounter when the trip ensues. As an organisation, who for the last decade has traversed and tried to humanise the myth of borders, the Invisible Borders Trans-African Photography Organisation has been invited to navigate these borders in the tradition of the organisation’s road trips and as part of forty art collectives invited to discuss borders and movement for the 2020 Dhaka Art Summit. It is for this purpose we have flown 17 hours from Lagos. On the flight to Doha, Innocent and I converse about our journey’s route. On the in-flight route map, Lagos to Doha seems more straightforward and less time consuming if you travel northeast of Nigeria, towards Chad, through Sudan, across the Red Sea into Saudi Arabia and then Doha. Instead, we move sharp north towards Tunis, fly just barely across the Mediterranean into Saudi Arabia, then Doha. It appears longer right from the jump. But, the earth is round, Innocent explains. If the former span was stretched out on a straight line, it would not save time.

I often wonder why I make these journeys, why we make these journeys. Why we travel thousands of kilometers subjecting our bodies to the trickery of time and the gamble of welcomes or the unfamiliar. But maybe it is this gamble, leaving Lagos and flying into Lagos, 9,409km away, that is the reward for our movement, the blurry and sharp lines between literal and metaphorical borders, between Dhaka and Lagos.

Where do they truly begin? Or end?