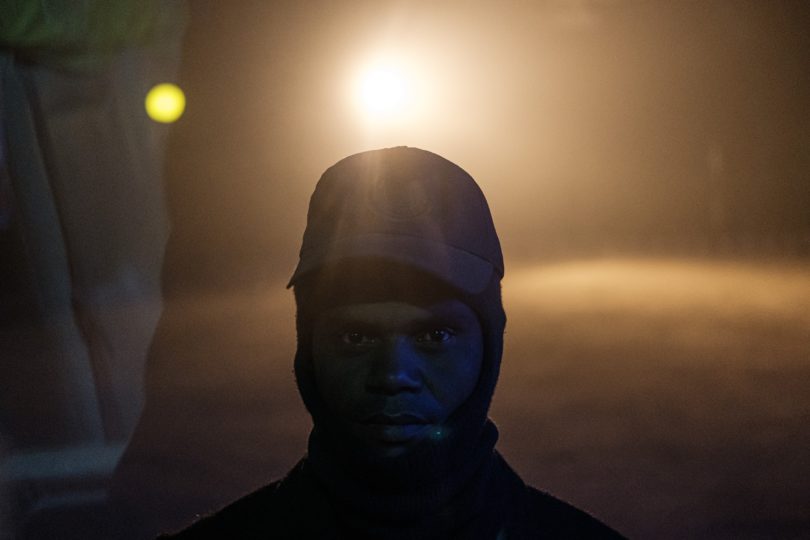 This is my first visit to Bangladesh. What I didn’t give much thought to is what extent it would be the first time for so many Bangladeshi people to encounter someone like me. Throughout our travels, this has been made clear on many occasions. Wherever we go, we – myself and my colleagues; even to some extent our Bangladeshi colleagues – are looked at especially. We are repeatedly asked where we come from, what are we called, if we are footballers, are we married, if our hair is real, what religion we adhere to, and so on.

We have come to Bangladesh for these encounters that carry, like pollen grains, seeds of deeply human experiences hoping to be pollinated through interactions. We hope to precipitate photographs, writings, and film resulting from these encounters.

Since the first road trip of Invisible Borders in 2009, one of the most contested discussions is the relationship between the photographer and the photographed. Where does the right and agency of the photographer begin or end in relation to the protagonist of an image? This discussion has taken several twists and turns throughout the decade with the proliferation of smartphone cameras; advancements in computational photography; as social media takes centre stage as a potent portal for the creation and consumption of visual content.

In the border town of Benapole, I witnessed – most likely for the first time – something close to the turning of the table regarding who gets to be photographed by whom.  I could barely touch my camera and already, I am being asked for “selfies” by almost a dozen young enthusiastic lads going about their daily lives around the border area. This would eventually become a constant feature everywhere we go.  Just like our cameras store photographs of the people, their smartphones now have photographs of us.  I presume they would be disseminated across social media platforms. If the number of people who photograph us is anything to go by, the diffusion of these photographs via the internet is likely to result in a pool of images that would make our visit known to so many Bangladeshi people such that, as we travel (and even afterwards) our photographs will proceed us.

It all begins with the gaze.  Whenever I think of the eyes, I always default to how much the eye is central to the definition of affection in the Igbo language of the people of Nigeria where I come from.  The closest translation of the word Love is “to see in the eye”.  Thus, all the while, I am looking to understand how the eyes work in this context. What is behind those concentrated stares?  Is it curiosity, inquisitiveness or mere fascination? Is there anything else there beyond the shock of unfamiliarity?

I am no stranger to being looked at as a way of underscoring a perceived difference. Here, however, it is that which is immeasurable, unquantifiable that ironically serves as a measure. It is the energy that surrounds every encounter. At first, when the eyes shoot out, my impulse is to cringe from them. Sometimes I try to avert my eyes, as if to cover my nakedness – a natural reaction to the stimulus of exposure. Yet, what mitigates the shock of encounter is not so much the usual facial codes like, say, an open smile, as much as it is a certain aura in the air exuded by bodies in space. This is what I refer to as Energy. Over the years, and after many encounters with strangers and strangeness, I have ceased to think of this energy as something abstract. It is tangible. Everything and everyone carry energy which, like an adamant law, “can neither be created nor destroyed, but is transformed from one form to another”, and to the other. It can fill a space in a room, or that between two strangers meeting only for the first time in the most unlikely places or circumstances.

On this road trip across Bangladesh, I am in search of intimacy. But what I am really interested in is how bodies communicate in and with space; how every gesture of the body is a transformed energy. How body energies manifest as fragments blocks free will upon which the atmosphere of a given place or people is built. Most evident in this journey is the unassuming hospitality, generosity of the Bangladeshi people we met so far. It is a regenerative and life-giving kind of generosity. The kind that wells up from the foundation of a people’s character; their will to be.

For every eye that has looked at me before it is followed by “which country are you from?”, I have felt – for the most part – an opening, a window that encouraged me to reach out and engage. Thus, while it may seem that I am being looked at and photographed more by the people, I too have been looking at them. Like them, I do not have any other way of contextualising my reality if not with my eyes. Every photograph I have made on this road trip comes from the window opened up by the people’s gaze and curiosity towards me. Every photograph represents the exchange and intersection of energies mutually negotiated by our gaze towards each other. What makes it feel novel and somewhat awkward, in this case, is that I am not just the one behind the camera, I am also a protagonist in other people’s stories over which I have no control.