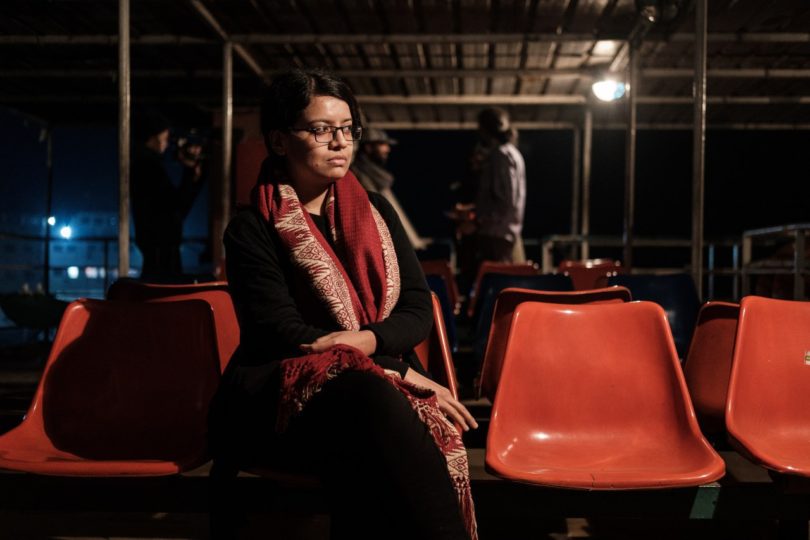 The day after we arrive, in a gallery inside the Drik office on the 7th floor of  Union Heights, Panthapath, Bangladesh’s 1971 Liberation War is on display. They are poignant prints from hundreds of thousands of archival footage photographed by Rashid Talukder documenting life pre, during and post-Liberation War. The images are sepia monochromes of midnight meetings, peace negotiations, rallies, marches, destruction, death, more rallies, more marches, victory. One of the images stand out. A severed head, white and with an eye gouged out, is lying in a brick rubble, a dusty haze hovering just above. It is the most haunting image in the room. Taken at the Rayer Bazar brickfield, Drik Manager, Rezaur, pleasant and bespectacled, explains that the ghostly dismembered head was one of many Bangladeshi mental powerhouses—writers, poets, thinkers—decimated by the Pakistani army in the December of 1971, on the very day the war ended, a kind of second or deeper destruction than had preceded the events in this frame.

It is at the center of this history that we try each other on like new clothes.

Tapash is nervous. Nervous about fit. His laugh is big. There is an earnestness about him as he attempts to explain the philosophies that guide his being; that he loves the solitude of his art, the solitude of his thoughts, empty spaces. Travelling in a bus with seven artists requires a certain kind of fit and we have less than 24 hours in this dressing room. There’s a lot to be nervous about. Within the context of a collective, what bits of this individuality would fall off, be questioned, examined, fall short, cause friction, forge bonds? I recognise this place, the unease of opening up this solitude to company.

Delphine is a blend of places and roots. A dash of Congo, a tuft of Belgium. When I introduce myself at the airport the day before, she smiles with tired eyes and shakes me with firm small hands. There is a quiet inquisitiveness about her. Like me, her roots are a critical part of her so she documents them in film, I in prose.

Rupa is Sadia to everyone but her close circle. She says we can call her Rupa. She does not say she is a photographer when she introduces herself to the group. We already know that. We should. Instead, she tells us what she wants to become. A writer. A filmmaker. A standup comedian. Like me, her dreams are constantly shifting taking hold and then uprooting themselves without warning. When she speaks about the work she intends to do on the road, she says she has been thinking a lot about cows. We laugh. At first, I think she may be making a joke. She’s not. There are very meaty issues trailing Bangladesh’s borders.

Billions of *insert currency* are lost every year in returns of fashion merchandise that do not fit. Millions more are now being sunk into new technology that promise customers the ability to try out new clothes before they make a purchase. Remote, snappier dressing rooms. You click a button and wear a dress and decide in a minute whether you are making a purchase or not.

There are no speedy dressing rooms for us.

In a rushed exit attempt, British colonialists had taken pen to map and drew geographic lines, Radcliffe Line, along its colony, carving up British India into a predominant Hindu India and a predominant Muslim Pakistan. From 1947 to 1971, patches of colonies morphed into or were annexed by India and Pakistan. A region like Kashmir was repeatedly fought for and has yet to cease being a contentious location in the region. Bangladesh, almost completely enveloped by India, wrested its freedom from Pakistan in the Liberation War of 1971.

When I was younger, my mother bought us clothes or shoes that were almost always a size bigger. We grew into them. This method of purchasing items that carried into the future was purposeful. It saved cost. I think about the borders in this region as an oversized suit the countries that were carved out of them grew into, then grew too big for.