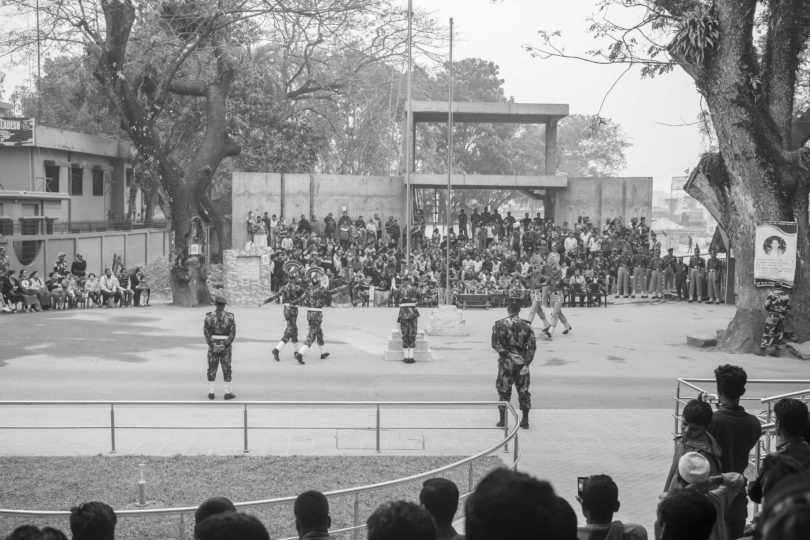 If you were leaving Bangladesh through the Benapole Land Port in western Bangladesh, murals of two national poets—Rabindranath Thagore and Kazi Nazrul Islam—will bid you farewell as you enter a short in-between area, no man’s land, before crossing a twin gate into India.  At the center of this in-between, Indian and Bangladeshi flags hoisted on white poles sway sluggishly in the morning breeze. Border security mill around guns slung over their shoulders keeping guard. I am intrigued by the country’s elevation of artists, the idea of the existence of such a thing as a ‘national poet’, and I wonder if this has carried on till present times or are just vestiges of the past.

At 4:30pm every day, on this strip of land, this in-between flanked by India and Bangladesh, a peace parade holds between India’s Border Security Force and Bangladesh’s Borders Guards. On one side is a Bangladeshi audience and on the other side, an Indian audience comprising mostly locals and a handful of tourists.

Habiba and I walk farther and farther into Shadipur, a village just off the path at the Benapole Land Port. The group has broken into pairs and trios. The path continues, unwinding, into the village. Houses painted in bright coordinated colours line both sides interspersed by brick houses, ponds and patches of cultivated land. Here, women are not a rarity. They sit by shops, on farms, chatting, working, cradling babies on their hips. Many stop to stare. Long and hard. They ask where I’m from. They wonder if the tightly coiled weave on my head is my real hair and an elderly woman is greatly disappointed when I say it is not. No one objects to Habiba’s lens. She even directs the images. In a compound where a man and two women clear a shallow hole filled with wet hay, she asks the women to exit the hole and tells him which way to turn, to what degree. They oblige her without hesitation. If they did not like being photographed by this stranger from the capital, it did not show.

Tahia meets us at the home of an affable woman whom Habiba photographs along the road and who wants us to come to her home. She stands just at the entrance into the compound watching us. We follow the woman to the back of the compound, close to the bank of a river. Kopotakkho River, so beloved and beautiful one of Bangladesh’s fine 19th century poets preserved it in literature; a ghost of itself. Like its land borders, even the waters in Bangladesh are caught up in the tussle of territories and lordship. Who owns what? Who is powerful enough to channel a river from one location to another?

Tahia asks to take a picture with Habiba. I click the shutter button and when I turn around to wonder why she is following us, she tells Habiba, in Bangla, that she is heading home. Her half day at school is over. We walk and they converse. We meet another group of women who ask if I am married and tell Habiba she does not look Bangladeshi. They have families in India. They are constantly crossing to visit.

We pass a man who sells white spiral candies he learnt to make in India and urges me to have a taste when I refuse to buy. It tastes like real candy, hard as stone, sugary. At an ornately gated Hindu temple later in the evening where people chant and clap around a circle of beautiful yellow marigold flowers and burning incense, a pujari asks us to stay for food. When we decline, he gives us a flier with the image of Sivananda Baba, an Indian monk and yoga teacher who “has no desire, no depression, no tension, no hypertension” and  “does not accept money and donation”. He asks that we come back some time.

At 4:30pm, an officer ushers us into no man’s land where a crowd is already waiting for the peace parade to begin. Infantry shake hands after minutes of heavy feet stamping. As they shake hands, the audience are roused to their feet and clap. Both flags are lowered and folded, senior ranking officers who sit and watch are saluted, then the ceremony comes to an end. All the while, cameras are clicking, recording, no holds barred. Once the last infantry make their way to their respective borders, the audiences file away towards India and Bangladesh guided by the officers. They are not allowed to mix. As the sun sets, the gates close. Tomorrow is another day.

As we file out, I wonder at the significance of the parade as well as its frequency. I wonder at the irony of it. If you were oblivious of the news and ventured into the ceremony, you might be amazed by the camaraderie, the symbolism of the parade. But it places in stark contrast to the incessant shootings along Bangladesh’s lengthy border including an infamous one from years ago, the victim, an underaged girl shot and hung over a border fence like a lone crow.

It is also about the small things. Before the British deemed it fit to hurriedly carve the region, West Bengal and Jessore District in which the land port sits, used to be one cohesive community. There were no double-gated fences, no need for peripheral symbolisms of brotherliness. I imagine in the crowd as I sit two loved ones sitting across from each other on both sides of the crowd. Maybe they exchange a small wave, a smile, all the space allows without the imposition of tiny booklets and official stamps. Maybe, for some of the locals, there is nothing celebratory about the ceremony, just a small chance to see, to be in the same space as family, as lovers, as friends separated by ill-thought out lines on a map.

One thought on “Illusive Binds”